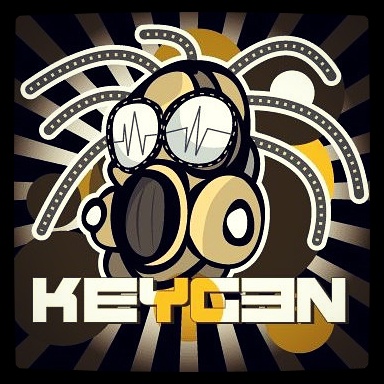 „Free parties and moviemaking are the two meanings of my life basicly, and Keygen Kaotic is one of the icons of hardtek tribe music. He was also living right in the places where we were shooting, well… Pleasure to have his music in the movie! “

Fan of electronic music since the beginning of the 1990’s, Keygen found in the underground techno scene the spirit and style of music he likes.He joined the sound system kaotic with which he organized many raves in the south of France and throughout Europe.

From 1995 to 2000 he participated in the organization of parties with sound systems from south france.
At that time, he performed solely as a DJ and distilled mixes from hardcore to tribe, acid, drum n bass, etc..
In 2000 he decided to go live and bought machines like the Akai mpc, which became his favourite machine.
He then ventured into the production of vinyls. He started by collaborating with the label war, then le diable au corps, astrofonik, underground techno, etc..

In 2004, during a tour in the Czech Republic with artists like Mat Weasel Buster, Nout Suburbass MSD, Beuns, the YESPAPA crew was born!
This had a resolutely ultra positive and happy frame of mind which influenced and characterized all his future lives.

Since 2008, he plays regularly in Versus with Mat Weasel Busters.
Now living permanently in Prague, Keygen plays throughout Europe and the rest of the world in clubs and festivals, delivering an effective and definitely happy live, mixing melodies and remixes but always spiced with a hard rythm and an ultra powerful kick, defined as the biggest kick on the hardtekno scene by his fellow artists.